Did you notice that flags were at half-staff today? I did not notice until I was out walking tonight and noticed that this was the case at the two fire stations that I passed.

I had to find out why after seeing the flag at the second station. I soon found out that today was the National Fallen Firefighters Memorial Service.

President Trump recently issued a proclamation that included the following:

“On Sunday, Oct. 7, 2018, in accordance with Public Law 107-51, the flag of the United States will be flown at half-staff at all Federal office buildings in honor of the National Fallen Firefighters Memorial Service.”

Since many Federal office buildings are closed for the weekend it is not as noticeable since they are probably not flying flags at all.

Yesterday they had a big event at the downtown fire station with a pancake breakfast and equipment on display. I should have stopped and found out more then, but was on my way to visit another shop after picking up my glasses.

Of course, if I had been getting my newspaper I may have known too. It has been five days since my paper was last delivered. I tend to scan more when I look at the paper on-line so probably missed the information. I hope that they get the delivery problem fixed soon as one of my morning pleasures is lying on the couch catching up on the news.

So, now I am thinking about fire stations and firefighters and images are coming to mind. This is an interesting drawing of the Hamburg Fire Station in the town where my father went to High School. 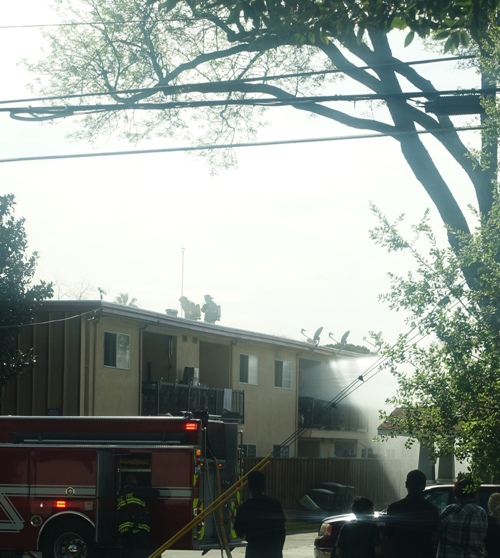 I also think of the great work that our Fire department does in putting out fires.

And of course I am thinking about the firefighters who have died in service. Our town has their own memorial for firefighters. It is a great statue of a life size fireman.

Here are a few posts about the memorial.

The Firefighter III – In the Rain

The Firefighter IV – At Night