Confederates in the Attic

Recently I have been noticing a book that is on a shelf near my work area. I pass by it many times a day and often think of the subject the book is about, especially in light of recent events.

I decided to go back and read the post I wrote eight years ago just after I read the book.

Since I didn’t have a clear idea for a post tonight I am going to share my review again. I may even have to get the book off the shelf and skim through some of the chapters.

Here is the post. I did fix a few grammar and spelling errors and also added links to posts about three of my ancestors who fought in the Civil War.

I just finished reading a great book about the continuing effects of the Civil War from the perspective of the South. 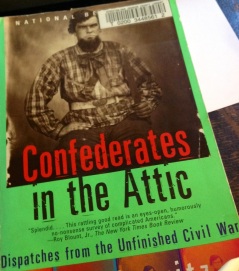 Confederates in the Attic by Tony Horwitz

Confederates in the Attic: Dispatches from the Unfinished Civil War by Tony Horwitz looks at how memories of the Civil War still affect life in the South today. The author covers a wide gamut of topics while taking us on a tour through ten states in the South to visit battlefields, monuments, cemeteries and other places of historic interest to the Confederacy.

One of the recurring themes through the book was how “Hardcore” re-enactors relive the Civil War with mock battles. The “Hardcore” want everything to be authentic and look down on the “Farbs” who do not do the required research or work to make sure their uniforms, equipment or behavior are correct for the time period. One of the field service engineers who I have in class occasionally used to be a Civil War re-enactor, and I have heard some interesting stories from him about the “Hardcore” re-enactors.

Another interesting part of the book was learning about the different societies that descendants of Confederate soldiers can join. The societies keep the past alive, including a continued dislike for the North in most cases. The author also explores what the Civil War means to many different groups of people in the South. The responses range from disinterest to those who are passionate about how they stand on different issues that prompted the war and also on which of those reasons was the true reason for the war.

Civil War is also not the only name that people use today. The two most commonly accepted names for the war are Civil War and War Between the States. However, War of Rebellion, War of Secession and War of Northern Aggression are also names that show up in the book and are used by different groups, depending on their social or political viewpoints.

The author also has some humorous stories to tell and a few of the chapter names alone will interest you enough to read the book. The Minie Ball Pregnancy, Gone with the Window and Only Living Confederate Widow Tells Some are all eye catching chapter titles and have great stories behind them.

The book started me thinking about participation in the Civil War by my own ancestors and close family members. I have not made an exhaustive search yet, but I do have several family members who fought for the North. My GGG Grandfather Silas Calvin Ramsey was in the 3rd Iowa Cavalry and was a Farrier. He was mainly on patrol in Missouri during the War. My GG Grandfather Alfred Van Duzor was in the New York Heavy Artillery, 5th Regiment and was at Harpers Ferry. I also have a GGG Uncle, Ellett Bolin who was with the 28th Iowa Infantry and was killed in the battle of Sabine Cross Roads near Mansfield, Louisiana.

I plan on doing more research into my ancestors participation in the Civil War. Someday I would also like to visit some of the battlegrounds where they took part in the war.

I would recommend this book to any of my friends, especially if they are from the South. It may make you curious about your ancestors and whether they took part in the Civil War.

1 Response to Confederates in the Attic