Tonight I will share some Thanksgiving thoughts from some of my previous posts.

The first is from my post Thanksgiving Poems and is a traditional poem that reminds me of the day of Thanksgiving.

At the table ere we sit,

we must never Grace omit;

But, for all the good things here,

So, a little child, I pray,

When we work or when we play,

Blessings on this day begun

For ourselves and every one:

Next is an interesting clipping that I found in one of my Grandma’s Scrapbooks and shared in my post Thanksgiving Prayer.

A Farmer’s Prayer for Thanksgiving

Lord of harvests, Keeper of our feedlots and orchards, we thank thee for a turkey that is fat.

We thank thee for bread with butter on it.

Would we could set music to the glorious autumn song of praise that rises from these frosted, browning stalks of corn, bent with ears of gold. Accept the fragrance of red clover in yon mow as burnt incense rising from the holy earthen alter of this stock-farm.

Help us to be humble, just, and kind as thy servant said — especially kind to those creatures over whom thou gave us original dominion, which we have subdued and fattened and multiplied and milked according to thy direction.

Make us good shepherds to them as thou art the Good Shepherd to us.

Bless all thine own children about this board or absent from it.

And make our hearts big enough to receive thy bounty in constant Thanksgiving. 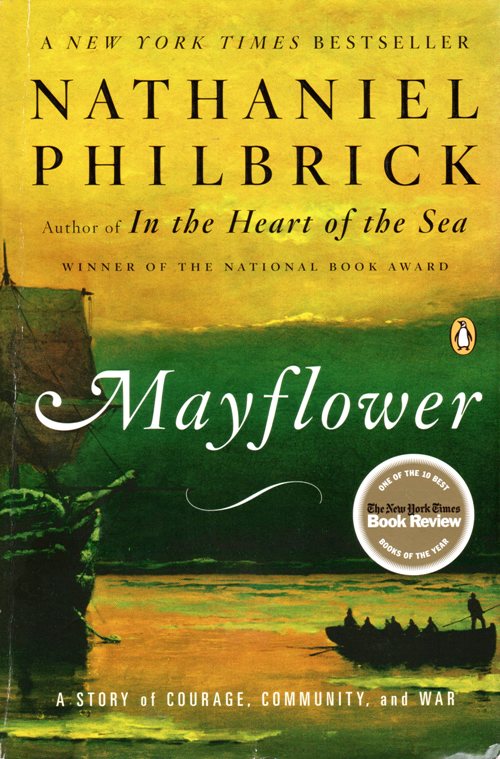 Here is a rendering in modern English of the Mayflower Compact.

The Mayflower Compact was signed by 41 of the passengers of the Mayflower including my ancestor George Soule. See: Mayflower Ancestry

I am also thinking about the 1623 Thanksgiving feast. The date caption in the picture is wrong as the 1623 feast took place in July and not in the fall. However, the caption at the bottom is very important. There had been a major change in how the colony was set up and the colonists now had land of their own to work in addition to their commitments to each other.

Back in 2014 I wrote a post titled Were the Pilgrims Puritans?

In the post I looked at two important points.

First, when were the colonists at Plymouth first called Pilgrims? I think you would be surprised at the date. They were at the time referred to as Brownists or Separatists.

Second, would they have been referred to as Puritans?

The Brownists would definitely not have been referred to as Puritans at the time of the voyage of the Mayflower. They were definitely Separatists and through the years had many conflicts with the Puritans of the Massachusetts Bay Colony over religious beliefs.

There is a lot to think about at this time of year. Especially as people today try to minimize the original intent of Thanksgiving.

Are you ready for Thanksgiving?

What are you thankful for this year?