Tonight I got my Nando’s Fix.  Of course, it was here in South Africa 17 years ago when I first discovered Nando’s. Since that time I have eaten at Nando’s around the world, so it was nice to circle back and have Nando’s again in South Africa.

I had looked on-line earlier to find the closest Nando’s to my hotel and found that it was at the Sandton City Shopping Centre. I had about a one kilometer walk to the shopping centre, but the way became longer as I then had to find it it in the huge mall.

Finally after asking a couple security guards I found the Nando’s.

I ordered a half-chicken with chips and then found a place to sit. Nando’s usually has some interesting sayings on their napkins and I like the current one they are using. “Clean Up Your Act” 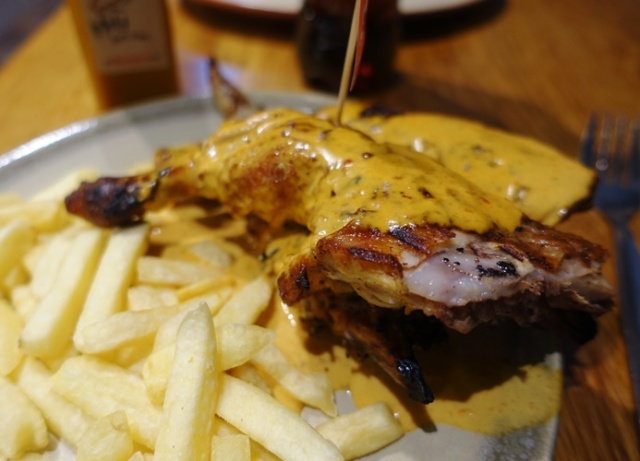 I ordered my chicken with a heat level of hot. I needed a little bit of heat after my mild lunch.

I was soon using my two fork method to deconstruct the chicken. Using two forks helps you tear the meat away from the bone a bit easier.

Soon all that was left was the bone pile. It was a delicious meal and also filled me up.

I am now back at the hotel watching a bit of the World Cup and will soon get some sleep.

It was nice to get a Nando’s Fix where it all began.