Today I have been having memories of time spent at the Johnny Rosenblatt Stadium in Omaha during the summer of ’89.

That summer I spent a lot of time in the press box helping a long time family friend run the message center of the scoreboard for the Omaha Royal games. I would help him run the scoreboard whenever I had a chance and would fill in for him when he was out of town. That summer is definitely one of my favorite Baseball Memories, and contributed to the Royals being my favorite team. 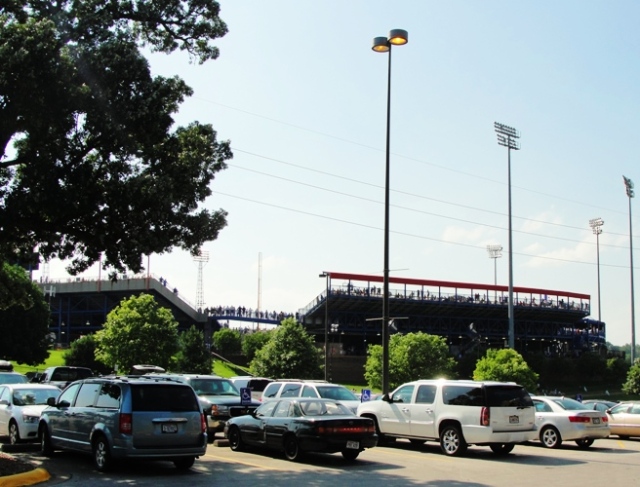 The College World Series was also played each year at the stadium, but I never got a chance to work during that time. The press box would have been too full for more than one person to work.

Working in a press box of a Triple A baseball team was very interesting. All the games were broadcast on the radio and we sat right behind the home team announcer. I always enjoyed listening to him while watching the game. He would also give tidbits of information that we would sometimes display on the scoreboard.

The message center was where the players names were displayed and also animations to help drive crowd participation. It was great to be part of the action.

The stadium was the largest in the minor leagues and was really too big for the Omaha Royals. The stadium had slowly been expanded to meet the needs of the College World Series. A decision was finally made to build a new stadium for the College World Series in downtown Omaha which opened in 2011. The old stadium has since been torn down and the land will be used to expand the Henry Doorly Zoo. The best zoo in the country will get some great new exhibits in the future.

The Omaha Royals did not move downtown, instead they moved to a new stadium that was built for them in Sarpy County. Along with the move came a name change.

The Omaha Storm Chasers now play in the 9,000+ seat Werner Park. The corporate sponsor also brings back some memories, but that is another story. The location of the stadium also brings back memories as I at one time lived very close to where it was built.

The friend who I worked with at Rosenblatt Stadium passed away yesterday. Leon has been a friend of our family since the 1950’s, and I have known him as long as I can remember. I have some great memories of his family and still stay in touch with some of his children. I have read many memories that people have posted about him on Facebook today and some of them are similar to mine. He was a great friend to many and there were several memories shared of how he would sing at church services. He loved to sing.

His family is in my thoughts and prayers as they deal with their loss.