History Day at the Museum

Today they had a special History Day at the Tracy Museum. The name of the day made me stop and think. Isn’t every day at the museum a history day?

In any case, this is an annual event at the museum where they have a special program. I went last year and wrote about the experience in my post Museum Day. 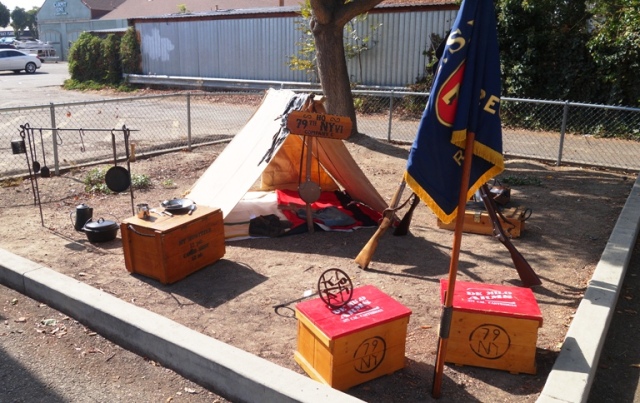 This year they again had Civil War re-enactors at the museum.

Here is a representation of a Civil War campsite.

This table had a nice display of the tools that were used to make bullets. You can see some of the minie balls on the table. I can just imagine the soldiers sitting around the camp fire making new minie balls for their next battle.

It was nice to also see the cannon again. One of the members of the company told me that they took this cannon to Gettysburg and actually pulled it up a hill to place it where their company had used one during the battle there.

Here is a closeup of the business end of the cannon. You can see that it has had some use.

It was interesting to know that the cannon had been at Gettysburg. Especially as I recently read a historical fiction book about Gettysburg. See: Swords of Steel

I also enjoyed listening to the military band while walking around and looking at the displays. They were playing songs from the Civil War era and wearing period uniforms as well.

Overall a very nice visit to the museum today.