The next destination on my Virtual Hike was Cross Creek Station, New Brunswick.

The previous destination on my virtual hike was Minto, New Brunswick. 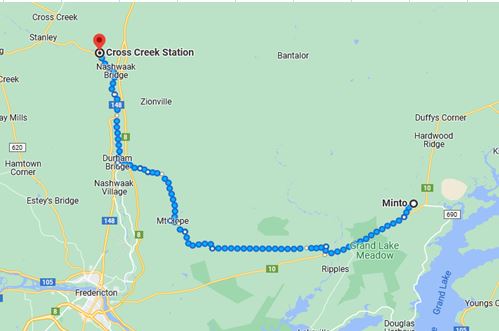 The virtual hike from Minto to Cross Creek Station was mainly over trails and roads that the Google Maps car did not record as they were remote areas. Canada also does not have as much mapped as the United States in most areas.

I am virtually making my way across New Brunswick to the US Border and have only two more stops before I make it into Maine.

Here was one of the areas where I had images. It was a mostly flat section with trees along both sides of the road.

Here is one place where I turned to follow a dirt road that took me through the woods.

I had to snag this image from Google Street View. Some one was having fun doing some donuts on the on-ramp to the highway. The road I was following was another one without images. I soon left this road and started virtually hiking on the New Brunswick Trail that followed an abandoned railway bed.

There is nothing to see at Cross Creek Station. I had chosen it more for the name, and it was also about the right distance for the next stop. From what I could find out there was at one time a railroad station there that served the area. After the railway shut down the site was abandoned.

There is a village of Cross Creek that is about 10 kilometers from the station and other small villages in the area.

From here I head up into the hills that are between the Nashwaak and St. John river valleys.

I am setting shorter distances between destinations for better motivation for my daily walking and so far it has been working. I have been walking more each day.

My current plan is to make my way toward northern New York through Maine, New Hampshire and Vermont. Perhaps I will find some interesting stops along the way. I already have an interesting stop planned for just over the border.

Images in this post are from Google Maps and Street View.