Are You Smarter than Your Teacher?

This evening I attended  a Zoom Bible study. The subject of the study was Psalm 119.

This reminded me of a lesson I put together back in 2008 for a Summer Series at the Dublin church of Christ. The theme of the series was “Favorite Chapter of the Bible” and I chose Psalm 119. 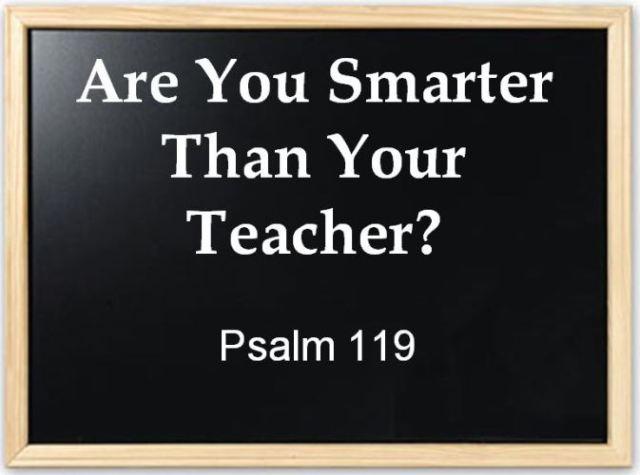 The title was based on the following verse in Psalm 119:

I have more understanding than all my teachers, for your testimonies are my meditation.

I then came up with some subjects for which I would ask questions based on Psalm 119.

As in the show I started with the bottom row and asked a question about Geography.

Where was Psalm 119 written?  The answer was give as Jerusalem, which is the most probable site. However, there are some scholars who contend that Psalm 119 was written while the Jews were in Babylon or possibly in other areas of Judah or Israel.

The next Subject is Literature.

Psalm 119 is an alphabetic acrostic or an abecedarian poem. The first set of eight verses each start with the first letter of the Hebrew alphabet, the second set with the second letter, etc..

In the next post we will cover the Language and Math questions.

I am not sure yet how many posts will be in this series and if they will be consecutive. If my mind wanders elsewhere I may slip a few posts in between the ones in this series.

But I will share the other questions and answers within the next week or so.

Are You Smarter than Your Teacher? – A study of Psalm 119 in five parts

Here are links to the five parts:

6 Responses to Are You Smarter than Your Teacher?