When researching your genealogy one of the things that you have to pay close attention to is the timeline of county formation in a state. Especially if your ancestors or family were early settlers in a state or an area of a state.

I will give an example tonight using Adam Sears who was the subject of my post on Sunday: 1819 Marriage Documents 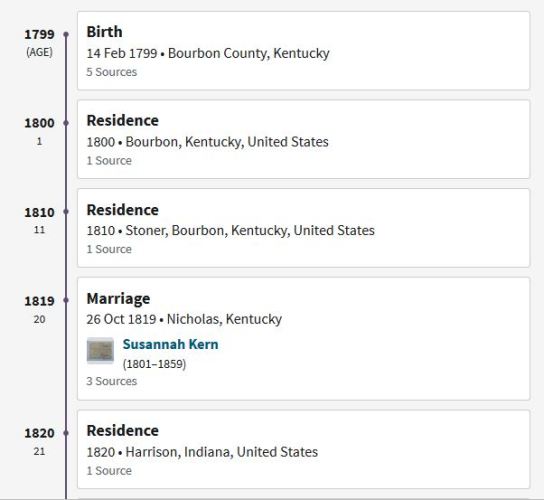 Here is part of my timeline for Adam Sears at ancestry.com

You can see that Adam was born in 1799 in Bourbon County, Kentucky

Here is a county map of Kentucky for 1799 the year that Adam was born. This and the following county maps are from mapofus.org which is a great resource for genealogy.

In this map we see Bourbon County as Bou. Part of the county is shaded green. The green area is the pending formation of Nicholas County.

So now the question is whether the Sears family lived in the section of Bourbon County that became Nicholas County.

As you can see from the timeline above the 1800 and 1810 Census both show that the Sears were still living in Bourbon County.

Here is the 1810 county map and you now see that Nicholas and Bourbon have been divided.

In 1817 Nicholas County gained some territory from Bourbon County. However, the border did not shift enough to include where the Sears lived in Stoner, Kentucky. However, it may have shifted enough for the Kern family to be in Nicholas instead of Bourbon. I still have not figured out exactly where they lived. I do know that they were involved with the Old Concord church which is in the southern part of Nicholas County.

East Union was the home church of Peter Hon who performed the marriage ceremony of Adam Sears and Susannah Kern in 1819, and it was not far from the Concord church. It is possible that East Union may have been in Bourbon County before 1817.

The Sears lived near the Cane Ridge church in Bourbon County and in the 1810 Census were listed just two pages after Barton W. Stone.  I just found this out tonight, and now I need to do more research 🙂

I had thought that the Sears may have lived in the area that became Nicholas County since it was where Adam got married. However a little research shows that it is not the case. This is why it is really important to carefully research locations that are near county borders. I am sure that I will find a better example to share sometime 🙂