Two years ago I wrote a post titled Irish Heritage, tonight I will add a little bit more information about my Irish ancestors.

However, there were also Irish Catholics who came to the colonies before the Revolutionary War. The numbers are not as large, and estimates vary as to how many there were. There were probably 75-100 thousand immigrants in the 1600’s and about 100 thousand in the 1700’s.

My Leeper family has been in the Americas since about 1733 when Andrew Leeper emigrated from County Down. The Leepers were Presbyterian and they settled in Chester County, Pennsylvania.

Another branch of my family were Scottish Covenanters and came to Pennsylvania later in the 18th century.

The picture above is of my 4th Great Grandfather Absalom Leeper who was born in 1790 in Pennsylvania. He became a minister in the Christian Church and moved to Iowa.

Of course, St. Patrick’s Day is more about the Irish Catholic traditions, but it is still a great day to remember our Irish heritage.

I will definitely be reminded of my Irish heritage tomorrow. The office that I work in is in Dublin, California so we are surrounded by Irish names and images. Many of the street names are Irish and there are shamrocks all over the place.

Here is a picture of the Dublin Boulevard bridge crossing over the Alamo canal.

Here is a closer look at the side panels of the bridge. These images are in many places around the city. 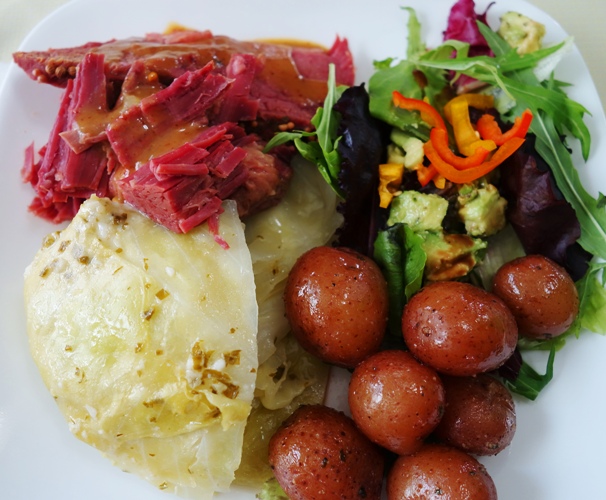 I had corned beef and cabbage for lunch on Sunday. It was really delicious.

There is some interesting history about Ireland and corned beef, but I want to research it further before I write more about it. However, I will share that the term ‘corned’ comes from the coarse salt or corns of salt that were used to preserve the beef.

I am sure that I will have another opportunity to have corned beef and cabbage as it is usually served in our cafeteria on St. Patrick’s Day.

Do you have Irish or Scotch-Irish ancestry?