For some reason I was thinking of owls earlier today. I remembered two pictures that I took of owls last year, so thought I would post them today.

The first picture I took in April of last year. I was out taking a walk and all of a sudden caught something out of the corner of my eye. I stopped, turned on my camera, and was able to get this great picture. 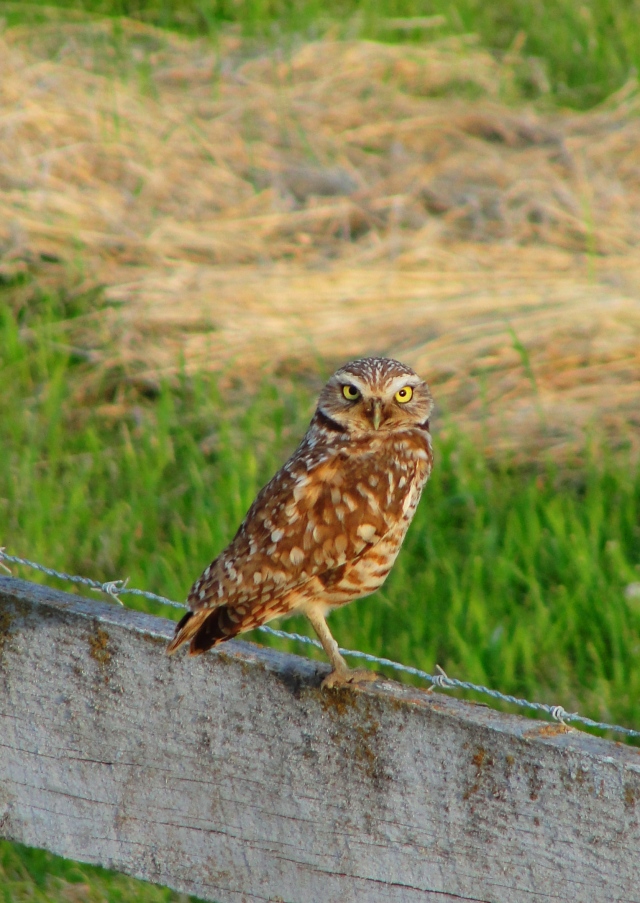 In this picture we have a Western Burrowing Owl (Athene cunicularia hypugaea). The owl was standing on a fence just a few feet from the sidewalk I was walking down. I was so lucky that the owl did not fly off immediately. It just stood there and looked at me while I took several pictures. Behind the owl was a recently mowed field of hay. I am sure that the mowing displaced several families of mice and that was why the owl was hunting there.

Burrowing owls live in underground burrows. Sometimes they make their own, but often live in man made structures such as drains or even nesting boxes. Burrowing owls help keep areas clear of rodents and some people encourage them to nest in certain areas. I also found out that April is nesting season, so maybe this owl was keeping an eye out for the safety of the nest.

In any case, the owl soon flew down into the hay field and was swooping down on a mouse. I continued on my walk.

I actually took a lot of good pictures on this particular walk. It is always counterproductive for me to take a camera along on a walk if I planned on walking for exercise. Thankfully, my camera is small enough to slip into my pocket.

I took the second picture later in the year. I was getting my car serviced and was walking around the dealer’s parking lot looking for good picture opportunities. I saw a small bird fly into a tree near me, and I was trying to get a picture of it when I spotted the owl hiding in the tree.

Here we have a Barn Owl (Tito alba pratincola). I took picture after picture trying to find just the right angle to get a clear shot of the owl. It just would not cooperate with me :-). However, I do like this shot. You cannot see the face, but you can imagine those piercing eyes that it has. It is actually neat that they are covered. The unclear shot reminds me of how well an owl can hide itself from predators.

When I was young I used to collect owl figurines. I liked that they were symbols of wisdom and knowledge. I still have several of them setting on a shelf in my home office. They are keeping an eye on me while I write this.