Tonight I will share some pictures from a trip to Tokyo in 2014. I arrived after dark on the first day of the trip and was bemoaning the view of the parking lot. I was staying in a very nice hotel and knew that I should have some good views. However the next day I found that I was perfectly positioned to take pictures of Fuji-san with the clear air after a rainy day.

I zoomed in for a better picture, but couldn’t focus well with the light conditions. I thought that this would be my best look at Fuji-san.

I knew that seeing Fuji-san from Tokyo was a rarity and that it could only be seen on very clear days. Similar to being able to see the Sierra Mountains on my way home from work. I am lucky if I can see them one time a year. It takes just the right atmospheric conditions.

The next morning I could barely see Fuji-san when I first got up, but could definitely see that it was covered with snow.

After getting ready to go to the convention center I took one more look out the window. The clouds had lifted but the sky was not quite as clear as it was earlier. I was able to get a nice picture of the snow covered volcano. 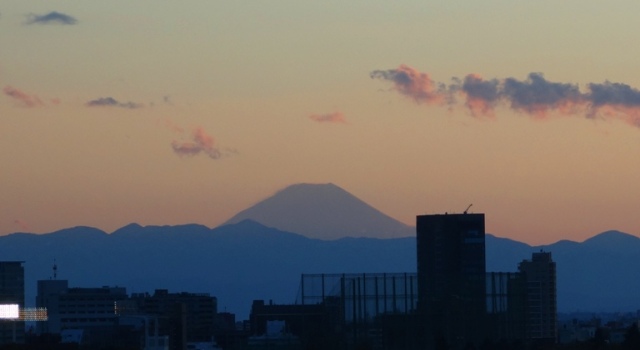 That evening Fuji-san was nicely silhouetted against the sunset. You could really see the shape of the volcano.

Fuji-san is the tallest peak in Japan and has a rich cultural significance.

Fuji-san last erupted in the early 1700’s but is still considered an active volcano. There were fears that activity would increase after the 2011 tsunami, but no noticeable changes have been seen so far.

I shared this picture before in my post: One Last Sunset

The picture was taken on my last night in Tokyo during the trip.

I am glad that I was on the right side of the hotel to see Fuji-san. This is also the direction of the Olympic Stadium so another reason why I am thinking about the view tonight.

This also reminds me of Mount Diablo. Some days the peaks appear much closer than other days. It all depends on the atmospheric conditions.