Did you have a favorite record when you were growing up?

Did you have one that you played over and over? 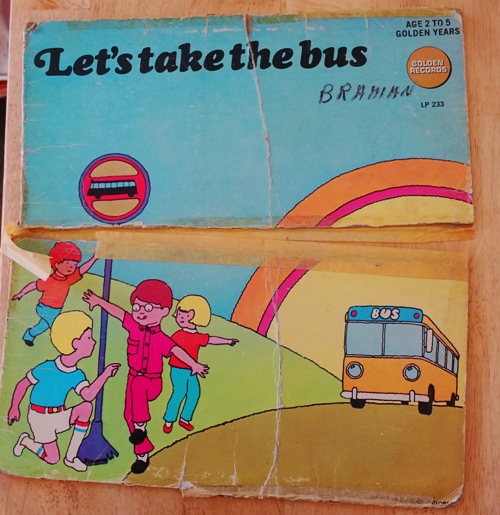 I would listen to Let’s Take the Bus over and over again. As I listened to the record this afternoon so many memories flooded back.

The record cover is in very bad shape and is in two pieces.

Each of the songs has in it “Here comes the bus and its going to stop for us”. Even today I often think of these songs when I see a bus.

The songs are of course all educational and have a good message.

I was actually surprised that the record still had very good sound quality. It does have a bit of crackle, hiss and pop but no skipping despite the abuse it took during my childhood.

My record player is within arms reach of my work from home spot, so I have been listening to records ever so often while sheltering in place. Not on hot days though as the mixer puts off a bit of heat.

This afternoon I also listened to another favorite that was all about Multiplication and Division. I already had my times table down by the time I got this record, but perhaps it helped my younger siblings learn a little bit about math. Walt Disney did have some good educational records long ago.

I have a stack of records I plan on listening to in the days ahead. More than a few of them will be taking me down memory lane.

What were some of your favorite childhood records?