My mind has wandered to Mexico City tonight. Earlier on Facebook I saw that a friend was going to be visiting Mexico City and was asking for recommendations.

I am remembering a visit to the Museo Nacional de Antropología. This is an amazing museum and does a great job of covering the history of Mexico. There were a lot of great exhibits.

The architecture of the museum is also unique. It includes a plaza that is protected by a large concrete umbrella that is supported by a single column. The column is covered with symbols from the past. The structure is know as ‘el parguas’ which is the Spanish word for ‘the umbrella’.

I am also remembering a visit to a church in the area of Mexico City known as San Angel.

The church building is known as  El Carmen and was at one time a monastery and school. It is one of the oldest churches in Mexico and was built in the early 1600’s.  The three domes on the building are very beautiful.

Today the complex houses the Museo del Carmen which is one of the most visited museums in Mexico City. 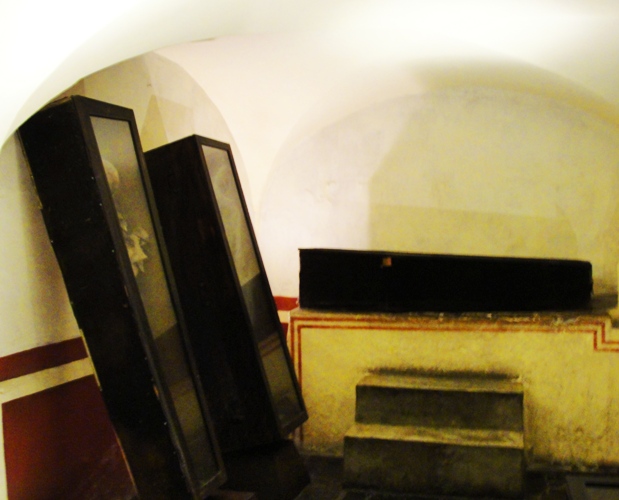 In the basement crypt of the church there are 12 mummies on display. The mummies were discovered by troops looking for treasure during the Mexican Revolution in 1917 or 1918. The mummies are thought to be early benefactors of the monastery. Due to soil conditions the bodies never fully decomposed and so were never placed into an ossuary.

Other neat places to visit are the ruins of Templo Mayor and the Metropolitan Cathedral. The Templo Mayor was burnt and destroyed the year after the death of Montezuma and houses for several of the Spanish leaders were built on top of the ruins. The Metropolitan Cathedral is built on top of other Aztec ruins as are many of the early Spanish churches.

It is common around the world for the conquerors to build religious buildings of there own on top of the ones of the conquered. Or, simply turn them into meeting places for the new religion.

Thinking of the Metropolitan Cathedral also makes me think of this picture.

I am also thinking about the great food in Mexico City, but that is the subject of another post.