To the Stores after Thanksgiving

Did you know that there is historical precedence to digging into the stores on the day after Thanksgiving?

There is of course much debate about when the first true Thanksgiving was. Was it in November of 1621, or was it just simply a spontaneous harvest festival? Was it in July 1623 when they set a feast of Thanksgiving in anticipation of the arrival of the Anne and the Little James?

I will not go into the details of the argument in this post. However, I will focus on 1623 and the arrival of the Anne and the Little James.

The two ships were bringing much needed supplies to the colony as well as additional settlers. Supplies were running very low and when they heard that the ships would soon arrive they held a fast for several days and then a feast of Thanksgiving.

You may wonder how they knew that the ships were arriving. They had been spotted out to sea and a small craft brought the news to the colony. It took the ships a bit longer to arrive than anticipated and the feast was held before they arrived. Therefore, several of my ancestors were late for Thanksgiving.

At least three of my ancestors were on the Anne which arrived the day after the Thanksgiving feast. The Little James arrived about a week or so later.

Even though they missed the feast, I am sure that there were leftovers just like today. They were probably glad to finally eat something different than what they had on the ship. 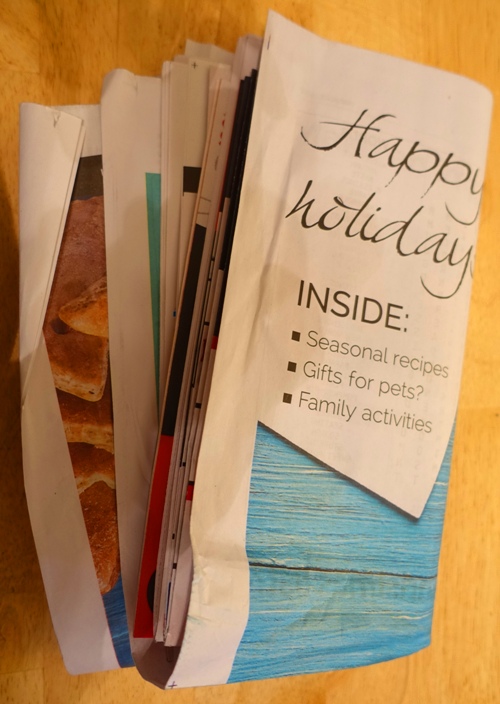 Most likely the colonists were digging into the stores on the Anne that same day as they were really anticipating the supplies that were sent.

Today, the stores have big sales to draw people through the doors and into the stores.

Here you can see how many ads were in my newspaper yesterday. By volume they were about 75-80% of the bundle.

You can see that there were quite a few ads and lots of specials. Unfortunately, many stores opened up on Thursday afternoon. I remember when stores did not open until a regular time on Friday, then they started opening early, then at midnight, now today they close for just long enough to get ready for the big rush.

Me, I stay home. However, I did go to Target this evening to pick up a few items. I talked to one of the workers that I know and she said that it was very busy today, but not as busy as yesterday.

If only they would go back to the historical precedent and wait until the day after Thanksgiving. Let the workers have a chance to celebrate Thanksgiving with their families.

1 Response to To the Stores after Thanksgiving