Today I decided it was finally time to get some ladybugs. My rose bushes have a lot of aphids on them and I need to get them under control.

So, I decided to head to OSH. I also had some rewards money that was going to expire soon and needed a couple of other items.

These are Coccinella septempunctata (seven-spotted ladybug or C-7). Ladybugs are very effective for aphid control. I have bought them before at the hardware store when I have had a lot of aphids. I haven’t had to buy them for quite some time but I guess they have dwindled out.

When I brought the container home I put it in the refrigerator to put them to sleep. It was recommended to take them out after dark and after watering the rose bushes. After getting home from my board meeting tonight I decided that it was time to let the little critters go.

I also did not put out all the ladybugs. It was also recommended to wait a few days to put out the remaining ones. This way you establish a colony and then add to it. This will end up with more of them staying put.

I took this picture with lighting from my cell phone. You can see that there are a lot of aphids on this rose. The ladybugs will wake up in the morning with a feast awaiting them. 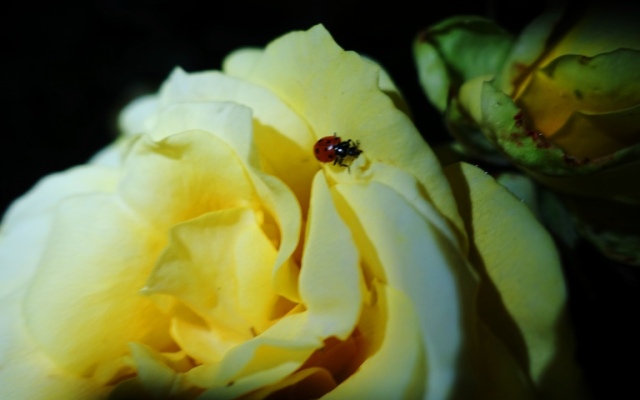 I though that this picture was interesting with the lighting. I hope that the ladybugs stick around and do their job well. It will be nice to have less aphids on my roses.

I thought about posting a bunch of pictures of aphids, and may still sometime soon. Perhaps some before and after pictures 🙂

I will hopefully get pictures of ladybugs hard at work in the morning.

Have you ever bought ladybugs?

2 Responses to Time for Ladybugs