One of the most mysterious structures in America is the Newport Tower in Newport, Rhode Island.

I have recently discovered that I have significant Rhode Island ancestry and have been studying more about the history of The State of Rhode Island and Providence Plantations.

While researching the families of my ancestors I came across a reference to the Newport Tower.

I remembered seeing a short article about the tower in one of my Grandmother’s Scrapbooks, so I decided to find it again.

Joanna Arnold married Zacharia Rhodes and their son John married Waite Waterman who was the granddaughter of Roger Williams who is mentioned in the second paragraph of the article.

I descend down through the Rhodes, Chapman, Shafer and then Van Duzor families. My grandmother who kept the scrapbooks was a Van Duzor.

The Newport Tower is mentioned in the will of Benedict Arnold and is referred to as his Stone Windmill.

The origin of the Newport Tower is shrouded in mystery. The accepted history is that it was part of a mill that was used by Arnold to grind corn. 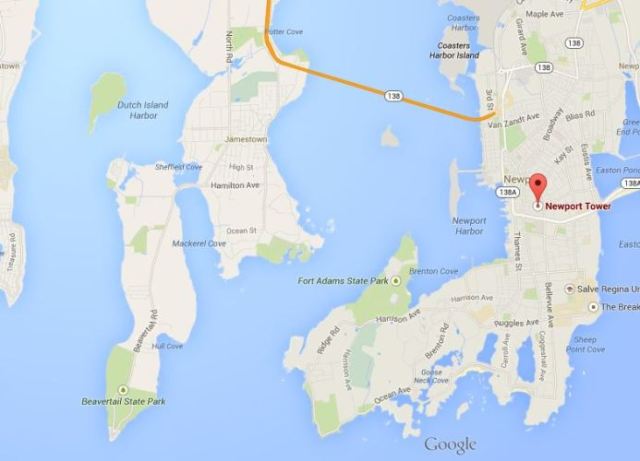 Several studies have shown that it was most likely built in the mid 1600’s, which correlates to the time that Rhode Island was settled by refugees from Massachusetts.

So who built the Stone Tower? There is doubt that Benedict Arnold would have had the skills required to build the tower. However, it may have been built for him.

I have a new theory about who built the Stone Tower. I have made a search to see if this theory has been proposed before, but cannot find it anywhere on the internet. However, I would be surprised if someone else has not thought of this theory.

In the 1677 will of Benedict Arnold he leaves his interest in Dutch Island to his sons.

When I read this my theory started to form. In the map above you may have noticed that I didn’t center the Newport Tower on the map. In the upper left of the map is Dutch Island and Dutch Island Harbor.

Dutch Island was claimed for the Dutch West India Company in 1636 by Abraham Pietersen Van Deursen and was still in his possession as late as 1664.

Newport was founded in 1639 and Benedict Arnold moved there in 1651.

Dutch Island and the Newport Tower are less than five miles apart.

Van Deursen was not only at Dutch Island, but also in New Amsterdam where he built a windmill and was a miller.

My theory is that he either built the Newport Tower previous to the founding of Newport in 1639 or perhaps he was contracted by the settlers of Newport or Benedict Arnold to build it later. There is even a possibility that it could have been built as early as 1627 as there is evidence that Van Duersen was in America on an earlier trip.

Abraham Pietersen Van Deursen is my 9th Great Grandfather, so it is of interest to me to do further research and see what I can find. Perhaps I can help solve a centuries old mystery 🙂

One of the interesting things about researching your family history is that you sometimes find ancestors from different branches in close proximity to each other.