One of the wonderful things about searching through my Grandma’s scrapbooks are finding interesting articles that she saved. A while back I was looking through a 1956 scrapbook and ran across this headline.

The First hamburger in Iowa? Wasn’t the hamburger invented at the 1904 World’s Fair in St. Louis?

There are many different claims as to who served the first hamburger. Of course, it all depends on the definition of a hamburger. Today, a hamburger is usually defined as a being made with ground beef and served on a bun. If we go with this definition then this claim from Clarinda is definitely in the running for the first commercial hamburger.

There is an earlier claim about a Oklahoma rancher who would serve burgers on his wife’s homemade yeast buns every Fourth of July starting in the early 1890’s. However, this was not a commercial endeavor.  There are also earlier examples of ground meat being served between slices of bread at concession stands or diners. Some of these even had interesting ingredients such as coffee or spices. 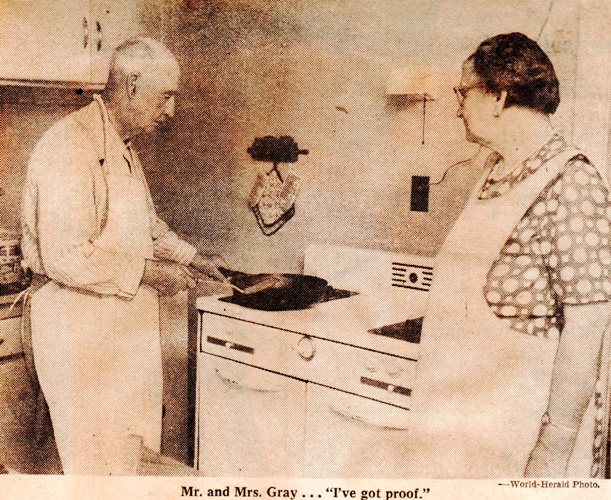 So, when was the first hamburger served in Clarinda? Bert Gray’s hamburger business started in 1901 or 1902 in a little cafe on the Courthouse square in Clarinda. Bert knew an old German butcher who suggested that ground meat would make a good sandwich. Bert first tried mixing ground beef in an egg batter and frying it, but no one would eat it. He then simply added a little flour to hold the meat together and the new sandwich was born. The old German, Mr. Wall, had come over from Hamburg, Germany so the new sandwich was called a hamburger. Being only 40 miles from Hamburg, Iowa probably didn’t play into the naming of the sandwich :-).

Bert would buy buns from the local bakery to serve his hamburgers on along with chopped onions, catsup and mustard. Sound familiar?  The hamburgers were sold for a nickel and with the soft and juicy burgers he almost ran the other cafes in town out of the sandwich business.

The picture above from the Omaha World-Herald brings back some good memories for me. My Grandma had a stove in her kitchen that looked almost exactly like the one in the picture. My Great Grandfather Chub Van Duzor lived only about 15 miles from Clarinda and was in his early 20’s when Bert Gray served his first hamburgers. Perhaps he was able to try this new sandwich when he went to town.

The facts about Bert Gray and his hamburger were extracted from a 1956 article by Paige Carlin of the Omaha World-Herald. Here is a scan of the original article. 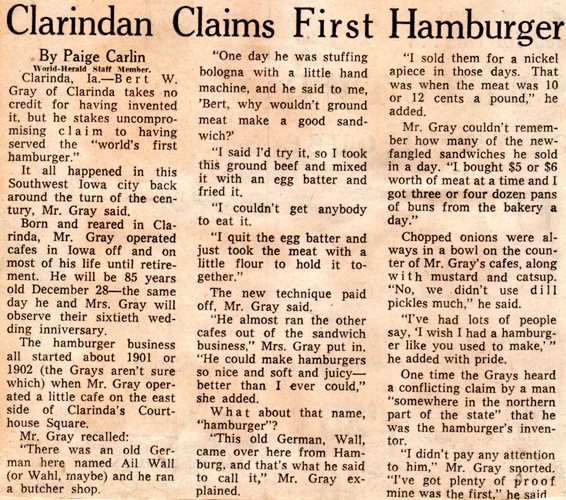 So did Mr. Gray invent the Hamburger? He does not make this claim, and like many foods it was something that was naturally discovered or invented in several different places. I do believe that he was most likely the first cafe or restaurant owner to sell hamburgers that would meet our current definition of a hamburger.

I think I will have a hamburger for dinner tomorrow night.

8 Responses to The First Hamburger