With Washington’s Birthday coming up on Monday, I will be thinking about him this weekend. 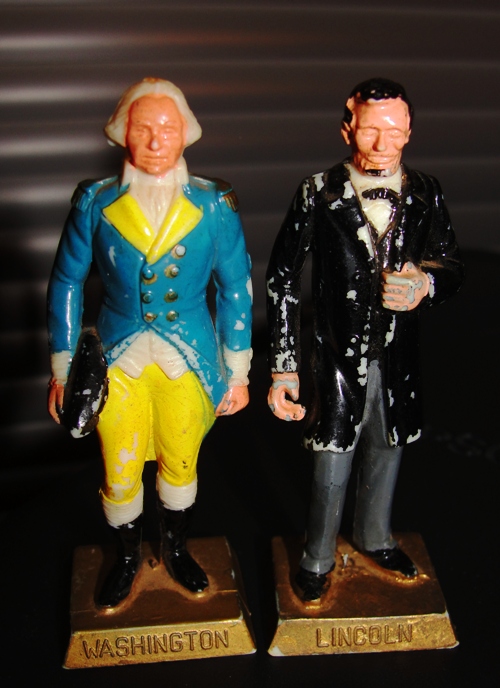 Washington is one of my two favorite Presidents, and the two figures above sit in front of my computer screen where I see them each day.

We remember George Washington for two major roles that he performed in our country. First, that of President Washington, but also he is well remembered as General Washington.

While looking through my Grandma’s scrapbooks I came across a Frank Andrea Miller cartoon that asks a very interesting question about General Washington. This is from a 1961 scrapbook.

Would You Have Served Under Washington?

When we look back at history we can see how bad the conditions were when the troops wintered at Valley Forge. Would we serve under Washington and endure the hardships that his troops did? In our world today we live in luxury compared to the colonial times. It would be hard to make a comparison. We do know that his troops trusted him and they gave their all for our country as they helped gain our independence from England.

My 7th Great Grandfather Lewis Ellzey served with George Washington as a vestryman in Truro Parrish. Although they were not in the Colonial Army together they served together in their local church.

See: Serving with Washington and They Lived Near: George Washington

I also came across another interesting clipping about George Washington.

This is George Washington’s farewell prayer to his troops in 1783.

I found a slightly longer version of this prayer than what is shown in the clipping above, so have posted it here.

Almighty God; We make our earnest prayer that Thou wilt keep the United States in Thy Holy protection; and Thou wilt incline the hearts of the Citizens to cultivate a spirit of subordination and obedience to Government; and entertain a brotherly affection and love for one another and for their fellow Citizens of the United States at large, and particularly for their brethren who have served in the Field.

And finally that Thou wilt most graciously be pleased to dispose us all to do justice, to love mercy, and to demean ourselves with that Charity, humility, and pacific temper of mind which were the Characteristics of the Divine Author of our blessed Religion, and without a humble imitation of whose example in these things we can never hope to be a happy nation. Grant our supplication, we beseech Thee, through Jesus Christ our Lord. Amen.

What a great prayer for our country.

Would you have served under General George Washington?