On My Table – V – Cathedral

Tonight in my On My Table series I will  show what has been slowly built during the last month. 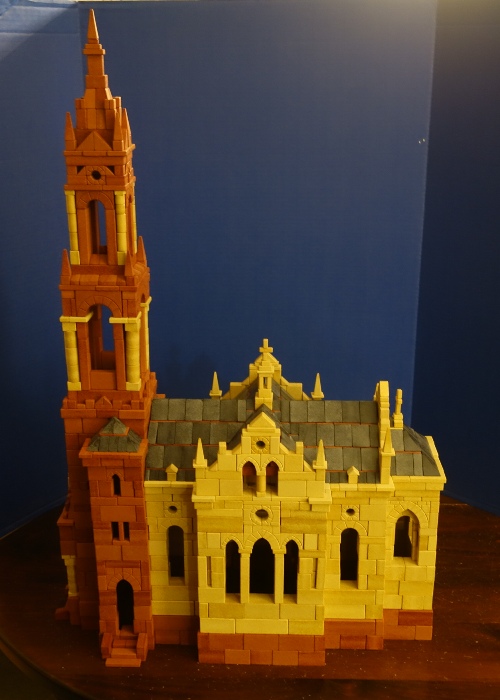 This is one of the largest buildings I have built with Ankerstein. The plan is titled Dormkirche or Cathedral and is built with set 24.

The tower is 35 inches in height, which made it a little bit difficult to place the last levels. There is a lot of detail in the building and it was a challenge to build in some spots. There are a few departures from the plan when I had a few troubles or was missing stones from where I used the wrong ones early in the build.

The roof of the main part of the cathedral was quite complex and used most of this type of roof stones.

I like the sides of the building and the different arches and roof openings.

I should have straighten a few of the stones before taking the pictures. I know where all the little imperfections are in the build, but for someone not knowing what to look for it probably looks a lot better.

It is relaxing to build with Ankerstein, but can also be frustrating. The stones that the building is made of are simply stacked on top of each other. No snapping or gluing the layers together. Just good old fashioned gravity. Despite this the structure if pretty stable, as long as I am careful while typing on the other end of the table.

The structure is still standing and I will probably take more pictures before taking it down. I have finished the last building in the current set, so may put all my stones back in the boxes and take a break for awhile. before building with the last four expansion sets.

I have build plans for other smaller building I may build for awhile.

1 Response to On My Table – V – Cathedral