Since we are again changing our clocks I decided to post pictures of the two most photographed clocks in England. Most of you will immediately know which clock is the most photographed, but have you even heard of the second?

Of course, Big Ben is the most photographed. Here is a picture that I took of Big Ben when I was in London about 15 years ago. 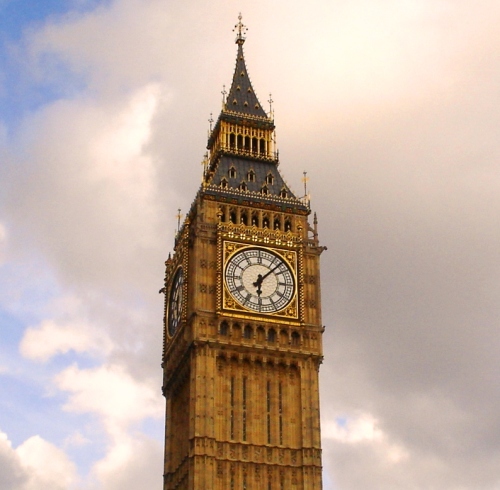 When I was in England 15 years ago, I also visited Chester to conduct a training course at a hospital. While walking through Chester the first evening I saw this beautiful clock above the street.

Even though the date on the clock is clearly 1897, it was not placed on top of Eastgate until 1899. The clock commemorates the Diamond Jubilee of Queen Victoria. It is the second most photographed clock in England.

Eastgate was built on the site of the entrance to Deva Victrix. During the closing decades of the first century, the Romans built a fortress at the site of present day Chester. Some historians believe that the Romans were planning on making Deva Victrix the capital of Britain, as the fortress was much larger than the other ones that they built in England.

The town of Chester is a beautiful town with many picturesque buildings. You can also walk on top of the City wall most of the way around the original City. There is only one small portion that is missing and the complete circuit is almost two miles in length.

I hope you enjoyed the pictures of these two photogenic clocks.