One of the interesting things about genealogy is deciphering handwriting in records. This is where looking at original records is important, as it is easy to transcribe names incorrectly.

In our family history we have a good example. In a transcribed record of the 1866 marriage of Sarah E. Darling it gives her father as Daniel Darling and mother as Abby Whitman. My third great grandfather David Darling’s wife is in the census as Abigail, but we didn’t know her surname. Was this couple in the marriage record my third great grandparents?

I was able to find an image of the original document to take a closer look.

The wedding took place in Cambridge, Massachusetts on November 29,1866. Since it shows Sarah E. as 30 years old she would have been born in 1836.

It also shows her born in Watson, New York which is where David Darling was in 1830.

We also see the parents of Sarah E. Darling listed. As mentioned above the transcribe record that I have seen shows it as Daniel and Abby (Whitman) Darling.

I decided to take a close look at how the name is written in the actual record. Here is a closeup of the name. Is this Daniel or David? I can see how it would be easy to read this as Daniel, but also how it could also be David.

Next I decided to see if there were other Daniels or Davids written by the same hand.

Here is the only example of a David. Here you can see that the ‘D’ to end the name does not have a loop and that the bottom part is closed.

It is still inconclusive. Perhaps the recorder just didn’t close the loop on the last letter of the name in the first one which would have definitely made it look more like David.

So, I needed to look at some other factors. I decided to search census records for Daniel Darling and could not find anyone that was even close to matching. However, as mentioned above census records showed David Darling in Watson, New York six years before her birth. In 1840 he was in Ellisburg, New York about 40 miles to the west of Watson. In 1850 he had moved 40 miles north to Cape Vincent. 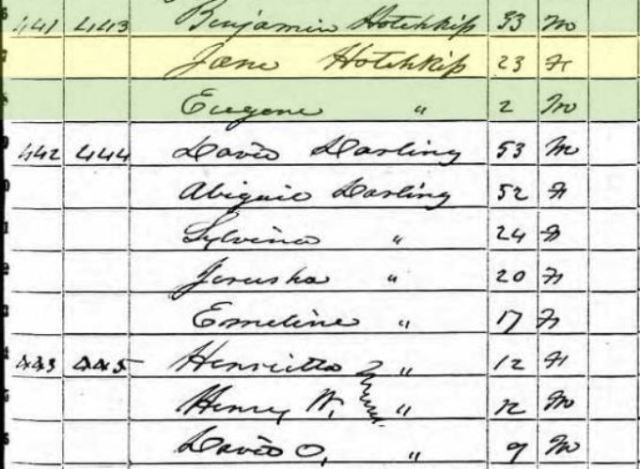 The 1850 Federal Census is the first to show the names of all the members of a household and here we see David and Abigail.

The highlighted area at the top is Benjamin and Jane Hotchkiss. Jane is a daughter of David and Abigail and my 2nd great grandmother.

Now for another mystery. There is no Sarah listed in the household of David and Abigail. According to the marriage record she would be 14 years old at that time.

I have several theories for this.

First, she could have been accidentally left off the census. You can see that the census taker had started to list the next household and then crossed out the numbers. Perhaps Sarah was simply missed as the correction was made.

Second, Sarah may have been working out and was not listed either at home or the household where she was living and working.

Update on the Third point. Emeline is Mary Emeline who married a Reins, lived in Texas and was buried in Iowa with the family. Another new possibility is that Silvina is Sarah and her age was reported wrong for the marriage. I actually found an entry in an older genealogy program I have that has her as Sarah (Silvina) and married to John Peabody.

Much more research is needed, but I am pretty confident that the husband of Abigail Whitman is David Darling and not Daniel.

4 Responses to Darling – David or Daniel?