Today while searching on Ancestry I ran across my Great-Grandfather’s draft cards.

They have some interesting information, so I thought I would share them

The first card is from WWI when Harvey was only 25 years old. He lived near Northboro, Iowa. It also shows that he was a Farm Hand and who employed him.

He was married with a wife and three children.

It is also nice to see his signature.

The Registrar also fills out some questions, I assume it is on the back of the card.

This is interesting as I find that Harvey is Tall and is of Medium build.

Of interest to me is the color of his eyes. He has Gray eyes. I am not sure why, but his hair color is not reported.

It is not often that you find physical descriptions of an ancestor.

Harvey also had to register for the draft again 25 years later. This time for WWII.

At this time Harvey was living in Omaha, Nebraska at 1626 Maple Street. He was married to Ruth and worked for a Concrete Products and Material Company. I just looked up the location of the concrete company on Google Maps and there is now a Popeyes Louisiana Kitchen there. 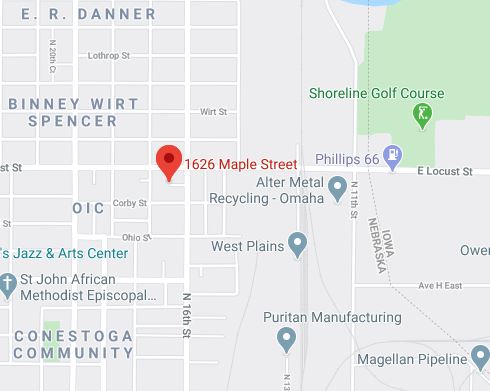 I also looked up 1626 Maple Street. There is no longer a house there, but it is interesting to see where he lived.

You can also see that it is only a few blocks away from Iowa. How can that be?

There is a little bit of Iowa on the Nebraska side of the Missouri River. At one time the river made a big loop and then later changed course leaving an oxbow lake. That area is now Carter Lake, Iowa.

Now to try and get some sleep to get back some of that lost hour.