On Saturday I made a trip to Chemnitz to visit a museum. I asked colleagues at work if there was anything else I should see while I was there. They all told me that I should see the Nischel. 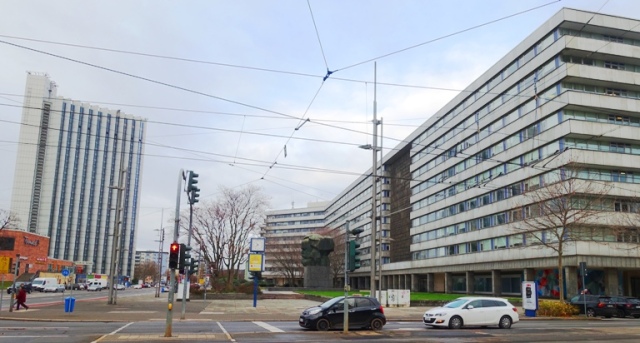 Nischel is a nickname derived from a German word meaning head or skull.

Here you can see my first view of the Nischel.

Here is a closer view of the big head and you should be able to tell that it is the head of Karl Marx.

I was wondering why there was a monument to Karl Marx in Chemnitz, as I knew that he was from Trier which is in the west part of Germany.

I found out that Chemnitz was renamed in 1953 to Karl-Marx-Stadt due to the large amount of industry there.

The people who live here do not look back, but look forward to a new and better future. They look at socialism. They look with love and devotion to the founder of the socialist doctrine, the greatest son of the German people, to Karl Marx. I hereby fulfill the government’s decision. I carry out the solemn act of renaming the city and declare: From now on, this city bears the proud and mandatory name Karl-Marx-Stadt.

On the wall behind the big head is a plaque with the phrase ‘Working Men of All Countries Unite!’ in four languages.

The Karl Marx monument was created by Lev Kerbel a Soviet sculptor. The monument was dedicated in 1971. The head is a bit taller than 23 feet and with the pedestal has an overall height of about 42 feet.  Overall the monument weighs over 40 tons. Definitely a big head.

As I was heading back toward the train station I walked by the monument again. The setting sun bathed the building in light and it made for an interesting picture. You can definitely see how large the head is.

In 1990 the city was renamed back to Chemnitz. There have been discussions as to the fate of the Karl Marx monument, but for now it remains as a reminder of the cultural history of the city.