Tel Abel Beth Maacah has been in the news the past week after the announcement of the discovery of a little ceramic head of a bearded man.

The piece is quite small. The scale in the picture below is a centimeter scale so you can see that it is about 5 centimeters in size. 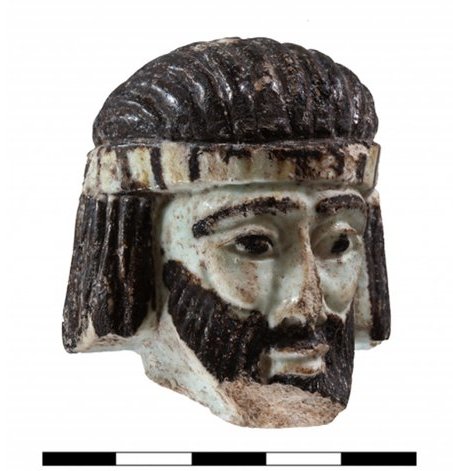 The piece is thought to represent a king. Some suggestions as to who it may be include King Ahab, King Jehu, King Hazael or King Ethbaal. They were all kings of the nations that surrounded Abel Beth Maacah from the time period that the piece comes from. The piece was found in a layer that has been identified as being from the 9th century B.C.

It will be interesting if they find more of the statue this year during further excavations this year.

I first saw the tel back in 2012 while touring Israel with Ferrell Jenkins. At that time excavations had not begun at the site, but they were making plans.

What I really remember is talking about what happened at this site, and this find makes me think of the account:

And Sheba passed through all the tribes of Israel to Abel of Beth-maacah, and all the Bichrites assembled and followed him in. And all the men who were with Joab came and besieged him in Abel of Beth-maacah. They cast up a mound against the city, and it stood against the rampart, and they were battering the wall to throw it down. Then a wise woman called from the city, “Listen! Listen! Tell Joab, ‘Come here, that I may speak to you.’” And he came near her, and the woman said, “Are you Joab?” He answered, “I am.” Then she said to him, “Listen to the words of your servant.” And he answered, “I am listening.” Then she said, “They used to say in former times, ‘Let them but ask counsel at Abel,’ and so they settled a matter. I am one of those who are peaceable and faithful in Israel. You seek to destroy a city that is a mother in Israel. Why will you swallow up the heritage of the Lord?” Joab answered, “Far be it from me, far be it, that I should swallow up or destroy! That is not true. But a man of the hill country of Ephraim, called Sheba the son of Bichri, has lifted up his hand against King David. Give up him alone, and I will withdraw from the city.” And the woman said to Joab, “Behold, his head shall be thrown to you over the wall.” Then the woman went to all the people in her wisdom. And they cut off the head of Sheba the son of Bichri and threw it out to Joab. So he blew the trumpet, and they dispersed from the city, every man to his home. And Joab returned to Jerusalem to the king. (2 Samuel 20:14-22 ESV)

It is definitely interesting that they found just the head of  a figurine.

I doubt that this little head was meant to represent Sheba the son of Bichri, but it is an interesting thought 🙂

Sheba rebelled against David in 972 B.C. according to one timeline I checked. This would be in the previous century from the time that the little head was deposited.

I have been back to Tel Beth Maacah twice since I first visited. In 2015 I visited the site with Luke Chandler and we were given a nice tour of the dig site. I need to do more research and find out exactly where the head was found as I may have been very close to where it was.

I took the picture above in 2017 when I again visited Israel with Luke. We did not go up on the tel, but did drive up to a place where we could get some good pictures of the profile of the tel.

Now back to packing for my long journey.