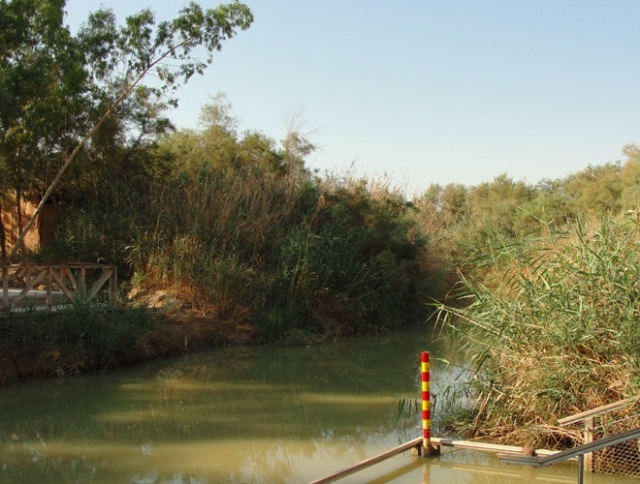 Here is the Jordan river at the traditional location for the baptism of Jesus by John the Baptist. Across the Jordan River from us was Bethany beyond Jordan. As you can see in this picture, the Jordan River is not very wide. You could easily cross the river here without a problem.

This site is only about three miles straight East of Jericho and would be very close to where the Israelites crossed the Jordan.

One of the things that stands out in this picture is the multi-colored pole. This shows the depth of the river. At the time that I took this picture, it was near the end of the dry season, so the river is at a very low level.

Now imagine a Jordan River in the rainy season and also at a time when all the water from its drainage basin reached this location just north of the Dead Sea.

I took this picture looking back toward the Bethany Beyond Jordan area as we turned onto the highway headed south toward the Dead Sea. As you can see the valley floor here is very flat. During the rainy season this whole area would have been covered with water as the river would be out of its banks and moving at a very fast pace. In the distance you can see the cliff walls on the East side of the valley. If you look at my post on the Hills of Jericho, you can see what the hills look like on the opposite side of the valley. During the flood season you would see a large portion of this area covered with water.

I can just imagine the wonder of the inhabitants of Jericho as the flood waters were stopped and the river disappeared in front of their eyes. Then the fear as they watched the large number of Israelites as they crossed the now dry river bed and set up camp on their side of the river.

We also talked about the fall of Jericho. Since I covered the Walls of Jericho in a post a couple weeks ago, I will not post any pictures of the walls in this post. Instead I will leave you with my favorite picture that I  took of the Jordan River. 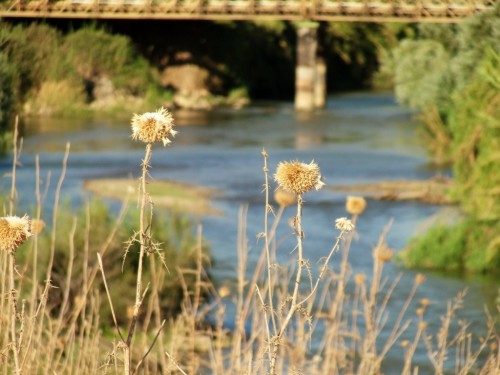 This picture was taken at the Jordan River just before it flows into the Sea of Galilee. The bus driver let us off of the bus and we all crossed the Jordan on foot by walking across the bridge. On the same day we also visited one of the sources of the Jordan River. You can read more about that day in my post North of Galilee.

The River Jordan plays an important role in many accounts in the Bible. I hope you enjoyed these pictures of this famous river.

To view links to the entire class series click on Walls of Jericho.