One of the neat things about traveling is that you sometimes run across a great new hobby. This was the case back in September 2004. I was in Jena, Germany and discovered Ankerstein. The hotel that I was staying at is connected to a shopping center. The shopping center is always running special events, and this time they had an Ankerstein exhibit. When I saw the area where they were building with Ankerstein, I was hooked. 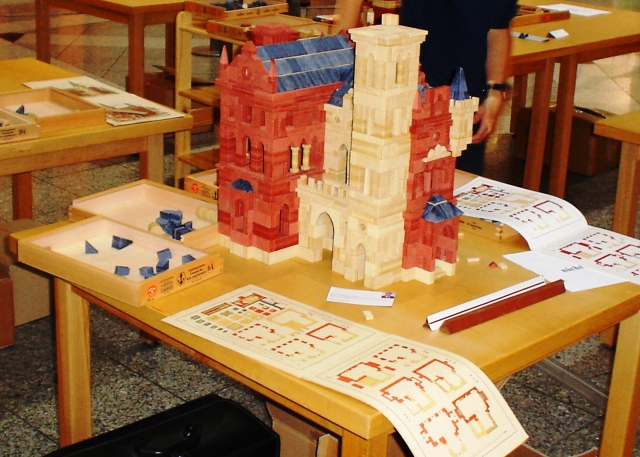 Later that week just before flying home, I was the owner of a starter box of Ankerstein or Anchor Blocks as they are also known.

Ankerstein is based off of a system of wooden building blocks originally designed by Friedrich Fröbel, For those of you who are not up on your education history, Fröbel is considered the founder of the Kindergarten system.

The stones were first made by Otto and Gustav Lilienthal, but did not become popular until manufacturing was taken over by Friedrich Richter in 1880. Richter was a manufacturer in Rudolstadt, Germany where the stones are still produced today.

As an engineer, I really like the concept behind the stones. The individual stone sizes are all based off of a cube. There are also other shapes of stones.

The stones come in three colors: Yellow, Red and Blue. These are the colors most often seen in the architecture of this region in Germany.

The stones are made of a mixture of chalk, sand and linseed oil and have a nice smell to them. They are formed and then baked. They are high precision, which makes them very easy to build with.

With my first box of stones, I was able to build structures like this Chapel using the enclosed plan book.

To build larger buildings, like the one in the first picture, you purchase extension boxes. The starter box is Number 6. When you buy box 6A you then have Set number 8. Then 8A brings you to Set 10. Each extension box comes with a plan book that shows you how to build the larger buildings possible with the number of boxes that you have. Each extension block introduces new blocks that allow you to build more intricate designs. The complete system includes 16 boxes.

I will share more about this interesting hobby in the future. I have visited the factory in Germany and also belong to an International club of builders.