Fireworks! Do you remember back when you were a kid and got so excited when you found out that you were going to see Fireworks! Of course, the booms, whistles and other loud noises might have scared you, but you were so excited to see the pretty colors exploding across the sky. 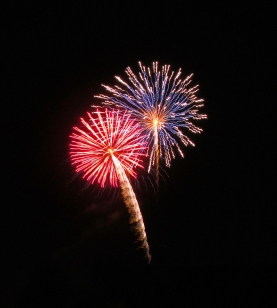 One of my first memories of watching fireworks is with my older Sister and my Dad. We had driven to our old property on the South side of Ottumwa and watched the fireworks being shot off over the Drive-in theater. We sat on the cab of our old blue pickup truck. Oh, the memories that come flooding back just thinking about that old truck. However, those will have to wait for another time. The fireworks were so exciting.

Through the years growing up in Iowa, we rarely saw the 4th of July fireworks in Ottumwa. We were often visiting relatives somewhere else and would catch them somewhere on the way home. I remember one year watching them in Jefferson City. The fireworks were going off over the Missouri River with the State Capitol in the background. I do remember one year where we watched them in Ottumwa after they had moved them to what we called the Lagoon Park.

After we moved to Ashland, Kansas the fireworks became more up close and personal. For one, each year I would work in the Boy Scout fireworks stand and would sell Bottle Rockets, Firecrakers, Fountains and many other cool items. After the 4th, we would get to shoot off a lot of them that we didn’t end up selling. Second, in a small town we were always very close to where the Firemen would shoot off the large shells. In fact, we had to be careful for those that misfired :-). Great memories of fireworks at the old ballpark.

Memories of fireworks in College are not as clear, I would have to think long and hard to remember all the places I have celebrated the 4th since that time as well. I do remember another time in Jefferson City just before the second time I moved to Kansas City. When in Kansas City I always went to some friends for a big 4th of July party. They lived just North of the city limits and we would have a lot of fun shooting off our own fireworks while watching the big ones far off in the distance.

For the last several years I have stayed close to home on the 4th of July. I like to enjoy a lazy day and then possibly meet up with some friends at the park and watch the fireworks and try and get a few good pictures. Maybe someday I will buy a tripod so that I don’t have to hold so still while taking them :-).

Some other great memories of fireworks has been with friends at Baseball games. We often will get a large group together to go to the fireworks games that the Oakland A’s put on each year. This year we went right before Memorial Day and the display was spectacular. It is always great to see the latest innovations in fireworks technology. I always seem to see something new.

I got to thinking about how many times I have seen fireworks outside of the country. I can only bring to mind a few occasions. Usually when I travel it is for work and we always schedule the courses at a time when there are no Holidays. Since it is Holiday time when we usually see fireworks it is rare for me to see fireworks when I travel.

What is your favorite fireworks memory?