Amish families have historically been big, and this can be seen in DNA results on Ancestry.

The base of this post was written three years ago and I am making some updates to see what has changed since then.

Ancestry used to have a feature called DNA Circles and I had some Big Amish DNA Circles.

The DNA Circle for Henry Hochstetler had 149 members two years ago when I wrote a post about Amish DNA circles.

Ancestry has since replaced DNA Circles with ThruLines and the ThruLines for some of my Amish ancestors are even bigger.

In ThruLines I had 708 DNA matches for Henry Hochstetler. You may notice that in this image he is shown as 5th great-grandfather. This is because when I wrote the DNA Circles post I had not been tested and I was using my Mother’s DNA results.

2022 update. The DNA matches for me have increased to 970. My  sister has slightly more at 986 as she seems to have more DNA from the Amish side of the family. My Mom has 1304 matches to descendants of Henry Hochstetler.

But, are there bigger ThruLines than the one for Henry Hochstetler?

Can we go bigger? 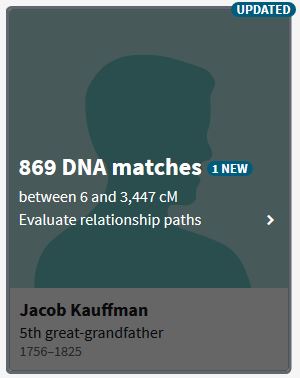 Here is Jacob Kauffman with 869 DNA matches. In the DNA Circles he only had 100 DNA matches two years ago. In 2022 this has actually dropped to 715, which means that changes have been made in algorithms and perhaps descendants were attached to him that may not have been correct.

The ThruLines only go back to your 5th great-grandparents, so I then decided to check my Mother’s ThruLines to see if by going back one more generation I could find one bigger. 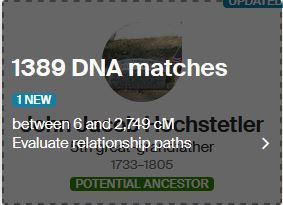 I found a couple of Amish ancestors with over 1,000 DNA matches, but the biggest was John Hochstetler with 1,066 DNA matches. In 2022 this has increased to 1,389 DNA matches.

Not all Amish DNA ThruLines are so big. I had one 5th great-grandfather, John Schrock, who had only 80 DNA matches three years ago. Now in 2022 it is almost 600.

The number of people with Amish ancestry who have had their DNA tested continues to grow, and the  Amish ThruLines will only get bigger in the future.

Do you have Amish ancestry?