Back to School Long Ago

The school year is starting up again and while I was out walking tonight I was thinking of a post that I wrote eight years ago. I have many memories of returning to school each year.

This week I have seen a lot of First Day of School Pictures. Of course I have also heard people complaining about school traffic, missing their kids, back to school drama and I am sure that the sports reports will be starting up soon.

While flipping through one of my Grandma’s Scrapbooks tonight I ran across a couple of images from 1961 that made me think of kids going back to school. 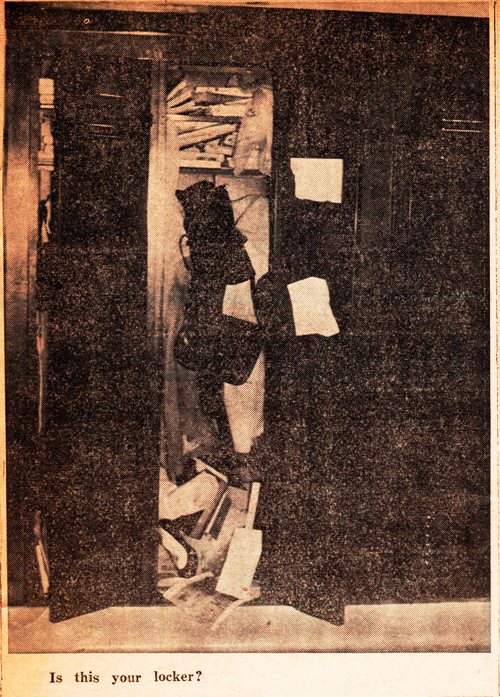 The image of the locker in this picture is not much different from when I went to school a couple of decades later.

The locker is at Hamburg High School in Hamburg, Iowa. The same page of the scrapbook also had an article written by a student.

Here are a few excerpts from Lockers! by Sharon Brown.

The rows of green lockers are about the first thing to catch a visitor’s attention in the high school.

It is common to see a student rush down the hall, give his books a toss into his locker, and proceed on his way. Of course, he has to put his books back together later, but what’s a few missing pages?

One prank, which some students of HHS seem to enjoy, is putting his neighbor into his locker. The lockers just weren’t made to hold anything quite that big, …

Locker-stuffing can become a time-saving habit. You simply open the door — all your books fall — pick up the ones you need and toss the rest back to fall out later.

Do these statements bring back any memories?

I remember that going to Jr. High and High School having lockers was a really cool thing. We finally had a place to put all of our belongings during the day while we moved from class to class.

I have to admit that my locker looked a lot like the one in the picture above. 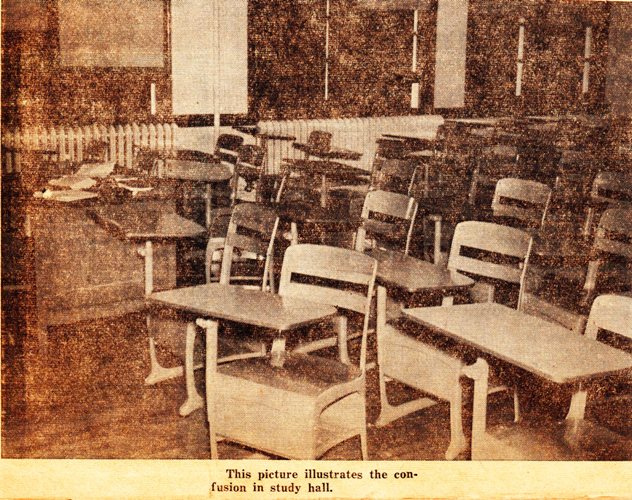 Then there was study hall. During High School I would often take advantage of study hall to finish my assignments so that I wouldn’t have any homework. What a shock when I went to college and had homework to do every night.

I remember desks that looked like this, but we also had some more modern desks that were more open. This is also bringing back memories of the desks that I had in First grade and Sixth grade that had a lid that would flip open.

In Second to Fifth grades I went to a new school where we carried our belongings around in a tote, and stored them in a cabinet at the end of each day.

More memories are flooding back, but I will staunch the flow for now.

Do you remember your High School locker?