Tonight I was watching another Curse of Oak Island preseason episode where they were talking about the top ten finds that show there is treasure on the island.

Right after the show a new episode of Cities of the Underworld came on. I have not been watching this series, but I have been intrigued by some of the trailers.

As I sat watching the first few minutes, it looked very familiar.The new episode shown tonight is set in Cappadocia, Turkey and is about the many underground cities there.

I am going back to watching the show, but thought I would share what I wrote about one of the underground cities  seven years ago.

Today the Archaeology news sites are reporting the discovery of an ancient underground city in Nevşehir, Turkey.

Here is a link to Ferrell Jenkins’ blog post about the discovery: Ancient underground city found in Cappadocia

Earlier this year I was with Ferrell when he visited an underground city nearby the new discovery. See: Cappadocian Chimneys

Tonight I will share a few pictures from an underground city.

We visited the Kaymakli Underground City which was added to the World Heritage List in 1985.

The underground city that we visited is a vast multi-level complex of excavated rooms that was used for hiding people and supplies. 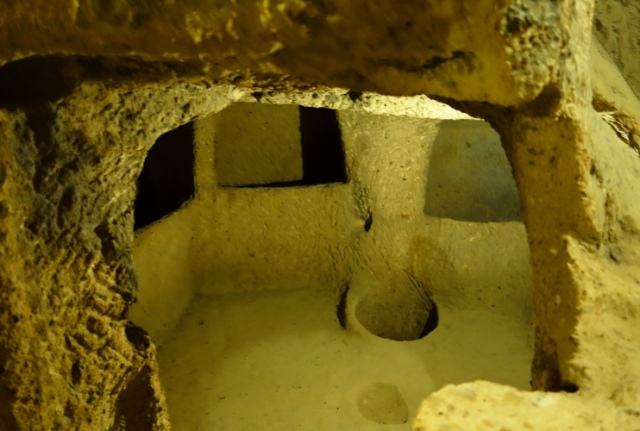 In the picture here you can see different storage areas along a passageway. We followed the passageways down about four or five levels. There were more levels below that were not open to the public.

Here is a storage area that is accessible from two different sides. This underground city is quite large, but according to information about the new one that was found it is tiny in comparison.

Some of the spaces in the underground city were quite large. The first floor of Kaymakli included stables and the second floor down contained a church. The living quarters were further down the tunnels.

We had to be very careful as we went through the tunnels as there were many ventilation shafts between the different levels. There were some places where we could look down through several levels.

I could imagine several phobias that people would suffer. Fear of high places when looking down through the tunnels and claustrophobia would be just a couple.

I could also imagine navigating through the tunnels carrying just a small oil lamp or torch. I think that I would volunteer for duty that would take me outside the city as often as possible. I am not sure I would do too well cooped up in the tunnels.

However, if it would save my life I am sure that I could live in the underground city for awhile. Definitely a little more daunting than Sleeping in a Cave for a couple of nights.