This year has been a very upsetting Men’s NCAA Basketball Tournament, but it has also been predictable.

Here is how it has compared to past tournaments.

Each year, I keep track of two numbers during the tournament. The first is UF or Upset Factor. The second one is BP or Bracket Points.

BP (Bracket Points) is probably familiar to most sports fans. When scoring your bracket you get 1 point for a first round win, 2 points for the second round and then 4, 8, 16 and 32 for the following rounds. Basically, you fill out the bracket with the higher seeded team winning each game. You then add up the points based on the tourney results. For the Final Four, the points are given when a #1 seed wins.

Here is what a perfect bracket would look like.

So, how upsetting was the tournament this year?

For analysis of the first four rounds see: An Upsetting Start and Most Upsetting Tournament

Here are the results through the first four rounds. The tournament this year made it to the Final 4 with 68 BP and a UF of 128.

The UF through the first four rounds set the all-time high, beating out the UF of 111 set in 2014.

Here is the final results for UF showing that this year topped 2014 by 17. It will take quite a year of upsets for this number to be surpassed. 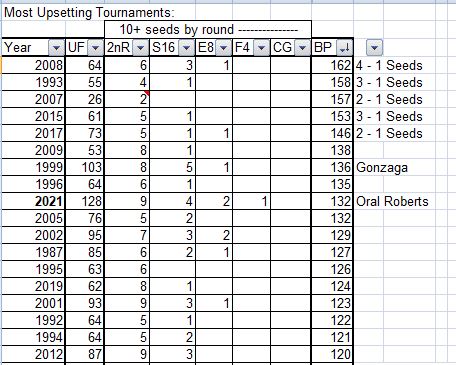 Here is the final BP and you can see that despite the many upsets it was still in the top-10 tournaments in predictability.

Many tournaments end up with early upsets but become more predictable as the rounds progress.

It was a very interesting tournament with a lot of exciting games.

I am thinking now how this tournament will be remembered. Will it be remembered for the Baylor win over Gonzaga in the final that prevented their perfect season, or for all the upsets in the tournament?

We do know that it will be remembered as the year of the bubble. I am sure that it will also be studied to see how the format affected the outcomes.

I also believe that we may see a lasting change to the tournament format. No, not playing in a bubble, but perhaps having the tournament starting on a Saturday instead of a Thursday. I believe that this format worked very well and would be less disruptive in the workplace if it was used again.

Even though many brackets got busted, predictable brackets would have done well this year.