Today there was horrible traffic on my morning commute. It took me an hour and 45 minutes to get to work this morning, where usually if I left at the same time it may take 45-50 minutes.

The reason for the horrible commute was a pothole at the Grant Line Road overpass on 580. New reports say that the pothole was 10 feet wide and 2 feet deep and it closed two lanes of the freeway. At this point there are five lanes, but it is also a convergence zone of several routs.

Update: I have the circle on the wrong end of the overpass. It is about where the black car on the right is. I can see the scar from the pothole repair as I drive by each day.

OK, this drawing is a bit messy, but so is the traffic. You can see that all the possible ways to get by traffic all converge back on the spot where the pothole is.

The pothole developed at about 4:15 and work crews did not arrive until after 6:00. The repair was in progress when I finally drove by, but it was not until afternoon until it was completed.

Here is a diagram that I used in an earlier post about expected traffic problems in the area. The problem occurred in the area for 1-580 Overlay and shoulder work. The roadway is a mix of asphalt and concrete. If the asphalt areas subside and the concrete does not then a very hard edge develops where the two surfaces meet. This has caused a very rough ride through this area for the last year. 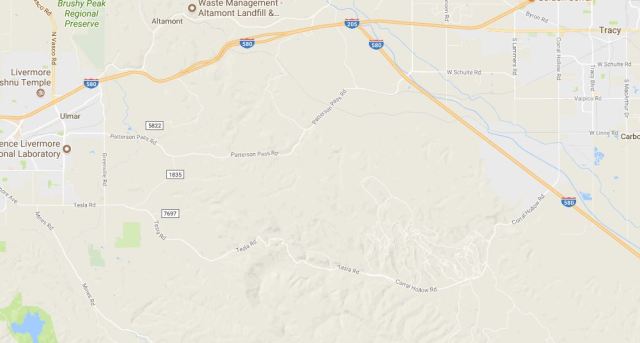 You can see here that 580 is the big path between the Central Valley and the Bay Area. There are a couple of two lane back roads, but they were absolutely plugged up this morning.

Backed up traffic like this brings out the worst in drivers. I saw many instances of rude and unsafe driving as people were fighting for position on the roads.

If not for an important event at work today, I would have simply turned back home.

On the bright side it only took me 25 minutes to drive home from work. However, that was after a very nice dinner and leaving the office at 10:00.

Hopefully the traffic will be better tomorrow morning.